The men-children are now on school holidays for at least 8 weeks.  In the case of one, he won’t be returning to “school” officially (TAFE instead as you recall next year) so he probably feels like someone who just got released from gaol.  And with the freedom from their normal schedules, they seem to believe they are also released from all other responsibilities.

I am not sure whether it’s a boy thing, or just a man-child thing (meaning my own sons), but all common courtesy, common sense, and common helpfulness has evaporated completely from the boys since holidays began.  They seem to believe that a carefree existence is normal for them and therefore for everyone around them.  We don’t know where they are, where they are going, when they’ll be home for dinner, if they’ll be home at all, and if they are they may have a few mates along with them.

Now I don’t know about everyone else, but I do believe it is common courtesy and respect for one’s parents that you at least keep them in the loop.  But no, our men-children seem to have their own ideas.  I do see it as a major failing on my part as a parent that my sons have not learnt such basic skills, so I can only hope that it’s an adolescent, carefree (and careless) attitude that will slowly fade as they morph into adults, with increased responsibilities.

Since they are so rarely here for dinner, our rule from a while back is we don’t even cook for them on school holidays, such is their unreliability.  If they expect dinner, then they need to let us know they will be here.  The reality is our habit is to cook for five people, so there’s generally enough if they “drop in” to join us.  However the other night, one of the men-children strolled into the kitchen and asked “what’s for dinner?”  As it was a Friday night, and I had of course worked all week, I simply explained (without an ounce of guilt):  “It’s Friday night, I don’t cook on Friday night.  Get your own.“  It works both ways!

Such is the extent of their rudeness, and seemingly lack of ability to even grasp the most basic of skills, the other day, one of the men-children was asking for the address of the holiday house we will stay at over summer.  When I enquired for whom, I was advised it was for all the people who were going to stay at our house on New Years Eve.  Well, you can imagine how quickly I hit the brakes on that conversation, doing a little more fact-finding very quickly.  Small details like how many are you inviting, and whom exactly?  And do their parents know that a bed (mattress on the floor) does not constitute me accepting responsibility for their under age daughters at Portsea for new years?   He was aghast that I not only expected the parents to phone me to make sure it was kosher, but if they didn’t then I would ring them all to ensure the ground rules were clear.  You see, I have been a 16-year-old girl before, so I know how it works (and how the truth can be very distorted depending on what you actually SAY).

After a lecture about the courtesy of actually asking before you invite five friends to stay, the same man-child went out that night to a gathering.  He had a few mates here before hand (of course he didn’t ask), went off to the party, and told me he didn’t know if he was staying at home or at his girlfriends for the night. I was pretty surprised to hear him and three mates arrive home at 3.30am at our house, (yep, thanks again for the heads up – they don’t listen or learn clearly), and then proceed to start-up the play-station for a few games.  No they don’t care if someone else (twin brother) is trying to sleep upstairs too.  So I yelled up the stairs to shut it down and get to bed – there was no argument – a grumpy mother always wins at that hour.  But I was left lamenting again why he just didn’t get my point of earlier in the day, and have ANY consideration for anyone else.

When the same child mentioned that he was planning to have some mates over to christen the new “party” deck we have just built, we casually asked how many that might be.  “Oh 15, maybe 30 people”!  WTF.  He has no idea…..really.

It is times like these that Father of a Man-Child and I tend to shut down their social lives, rein them in, ensure they’re at home for dinner, and use the chance to get some normalcy back in their lives and ours.  Sometimes the routine of being at school can actually be good for everyone.

So am I being unreasonable?  Or am I a stressed out parent who should just RELAX a bit more about her teenage boys?  Does a few weeks/months of being carefree matter at the end of the day, for them or us?  Or should I just accept that I am losing control of them, they are 16, and it ain’t going to get any easier to tell them what to do, as one reminded me the other day, when he casually mentioned that the piercing he has been so in favour of for a few years is now likely to become a reality very soon now that he has left school – great!

The last time he mentioned getting a piercing, we had to argue very strongly with him to avoid it.  Read more here.

Sometimes they surprise me April 6, 2012

But just occasionally, when you least expect it, they can surprise you in the most unsuspecting way.  As you know we now have two new rabbits, Hazel and Squeak.  We haven’t yet managed to freeze them on a cold night, or starve them, or frighten them to death, so I guess we’re doing something right.  Sister of a Man-Child is naturally loving having them, and provides them with lots of attention every morning and evening.  And I’m pretty sure the men-children sneak out there on a regular basis to see them too.  The girlfriend of Man-Child II adores them.  Even a friend of the boys the other day was interested in them, but I think he held back because he didn’t want to be a 16-year-old boy fussing over rabbits.  I am going to make a point of encouraging all of them to play with the rabbits – it’s good for them and a bonus for the rabbits.  It’s funny how we stop doing things because we don’t think we can behave like a child anymore isn’t it? 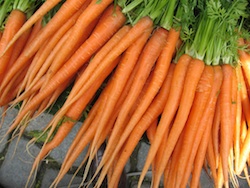 The other night Sister of a Man-Child and I were late home, which means Hazel and Squeak’s dinner was late!  When I arrived home, one of the boys was already home.  He casually yelled down the stairs that he had fed the rabbits, given them water and also some cabbage.  WOW!  He actually did something for someone else!  He was actually motivated to do something for another person (or in this case animal) that wasn’t directly for his benefit.  I thanked him graciously, and thought to myself it’s true – having a pet does teach children about the responsibility of caring for someone else.  I can only assume that he went out to visit them, and noticed their empty bowls and took it upon himself to feed them.  Hooray.  I wonder if I put the rabbits in his bedroom would he tidy it up?

Mind you, the same man-child doesn’t notice everything?  He asked me the other day where his father and brother were – I said away.  Blank look, followed by “I didn’t know they were going anywhere”.  To which I smugly replied “Well if you were ever at home or joined us for dinner occasionally then you’d know what was going on wouldn’t you!”  He seriously asked for that one!

Anyway, bring on more pleasant surprises.  I hope he continues to feed the rabbits when needed.  Somehow I’m doubtful I’ll convince him to clean out their cage on a weekly basis – although he might if I offer to pay!!