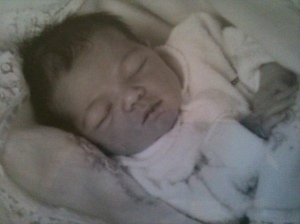 Sometimes an opportunity just presents itself for the birds and the bees conversation, and before you know it you’re halfway in and there is no stopping.  Suffice to say Sister of a Man-Child is now a little wiser than she was a week ago about Mother Nature and babies!

We were heading back from a long weekend away, listening to the radio, and they were chatting to callers about being pregnant and not knowing it.  Even our 9-year-old daughter could understand that it was a bit odd.  “Mum surely someone would know if they were having a baby wouldn’t they?”  And the average person would agree, yes surely you would know you were having a baby.  And if you listened to one caller, you would still not believe her story that she didn’t know until she delivered the baby that she was pregnant!!!!  Personally, I am really not sure how a 9 month pregnant women could not think she was having a baby – regardless of what the doctors said about not being pregnant – either that or you would be seeing an oncologist about a massive growth in your stomach.

But I digress.  As we drove home in the quiet of the car, I had a split second flash back to 9 years ago, and then out of my mouth popped my response: “Well not necessarily actually.  Because it happened to me when we were having you”.   And so the story about our daughter’s small beginnings unfolded.  From the discovery at 16 weeks that I was pregnant, to her amazing arrival at 41 weeks into the world.  She was keen to know if she was planned, or an accident.  I told her emphatically she was very much planned and wanted, but that it was a bit of a surprise to learn I was pregnant.

For readers who themselves are itching to know how someone who had already had twins could not know she was pregnant, here’s a small list of reasons:

Suffice to say I was indeed pretty shocked to be sitting in the doctor’s rooms to discuss my ongoing concerns about feeling “bloated”, having also been to the naturopath for some assistance, when she passed me the pregnancy test results – positive!!!!  Fortunately the 6-year-old twin boys in the room were too pre-occupied to notice my shock and our subsequent discussions.   Although they did notice that I became a bit vague for the rest of the day, walking up the same supermarket aisle several times and getting lost on the way to a good friend’s house.  Yes you could say I spent the day in absolute shock.  I didn’t ring Father of a Man-Child in case he had a car accident when I told him, so waited until I saw him later that day.  Our initial shock was mixed with absolute delight and then temporary panic, as the threat of twins was very high given my family history and an existing set.

Fortunately the scan revealed only one healthy baby (and the fact that I was 16 WEEKS PREGNANT), and the subsequent amniocentesis test (not a pleasant prospect but a necessary evil under the circumstances) revealed a girl – much to all of our delight.  Suffice to say it was a lovely (and short) pregnancy, enjoyed by me, hubby and the boys, and the excitement around the arrival of a baby sister was lovely for the men-children and family and friends.

Sister of a Man-Child then asked me how soon can girls get pregnant, which of course led us further down the birds and bees discussion, to talk of eggs and periods and when it would all happen.  As she is 9 years old and some girls unfortunately now start menstruating by 10 years old (far too early in my book) the timing is probably pretty good.   I explained that sometime between 10 and 14 she would indeed be producing eggs, but that didn’t mean she would get pregnant.  And I also explained that no you couldn’t get pregnant just lying in a bed with a boy (she did ask), but that when she had a partner, and they planned it, they would hopefully get pregnant when they wanted! 🙂

She also asked about how old you could be which is interesting, given some of my friends have had babies in their mid-late 40’s.  I explained that was possible, but also told her about eggs ageing and that physiologically you were better to have them a bit earlier if you could.  It’s amazing sometimes how they see the world, and how they manage to piece it all together.

So there you have it, the story of Sister of a Man-Child’s beginnings.   We have always said she was a Gift from God under the circumstances (but then really every child is), and most definitely a planned and longed for daughter and sister, not a “happy accident”!   Does the distinction matter?  Maybe not to some, but I think to my daughter she somehow wanted to know as we drove in the car and heard amazing stories from other women, that she wasn’t an “accident”. 🙂

I have written about Sister of a Man-Child before:  A Princess Tale.  She is such a delight!