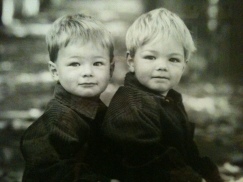 Just over 16 years ago, our darling men-children were born.  Two gorgeous little bundles of joy that had spent 37 weeks in rather cramped quarters it’s fair to say.  Any wonder they sometimes don’t like each other’s company!

I can still remember the day I found out I was having twins.  I was alone at the hospital for the scan, being the typical pragmatist.  Don’t fuss, you go to work (future) Father of a Man-child, I’ll be fine etc.  And of course I was fine, having breezed through the early part of the pregnancy feeling absolutely amazing, not a day of morning sickness, and at 18 weeks no signs of anything unusual.

Back then it was perfectly normal to have your first scan nearly half way through the pregnancy – so you can imagine my shock when they said “The first thing we need to tell you is there’s more than one in there!”  And before my brain could even register what they were saying “It’s twins”!!!  Oh-My-God.  My immediate thought, followed quickly by tears, was of my Mother, who 30 years before me, had learned the exact same news – that she too was to be the mother of twins (yes me and my sister).   Tears because sadly she was not there to share the news, and to swap the countless stories about being pregnant with twins, mothering twins, adoring and loving twins.

I made the call to (future) Father of a Man-Child from the obstetrician’s waiting room, still reeling in shock.  Thankfully he was absolutely thrilled, which helped me recover somewhat.  He thought the idea of getting two at once was “fantastic”.   I then went to work, and shared the news with everyone there.  The irony was not lost on any of them, especially since the day before I had mentioned the forthcoming scan and told them jokingly “all bets are off if there’s more than one in here”!!!!  With the number of twins in our family it’s fair to say it wasn’t a completely unimaginable event, but still a shock nonetheless.

I rang my Father and sisters that night to tell them the news.  I still remember Dad laughing (knowingly) and telling me how wonderful it was of course, and probably also sharing the same sense of deja vu about my mother.  And the call to my twin sister, which went something like this:  “Shit, Shit, oh shit, shit…shit, shit…..(hysterical laughter) shit!”  That was she, not me!

We were blessed with a wonderful pregnancy, a good birth (even though an unexpected C-section), and textbook babies.   They really were amazing from day one – good feeders, sleepers, and eaters, achieving all the milestones every baby should.   As parents, it really was twice the joy (and about 1.5 times the work of one baby for those who are wondering).  As parents we really couldn’t ask for more, except seven years later of course, when our darling daughter arrived as a little surprise package.

So Happy Birthday boys! I can’t believe how quickly the last 16 years have passed.  To watch you both grow into fine young men-children (with a few bumps along the way as this blog reveals) has been a privilege and an honour.

Love Mother of a Man-Child xo

Here’s one of the few stories about our early life with the men-children:  The Holiday from Hell, the only bad one we’ve ever had.