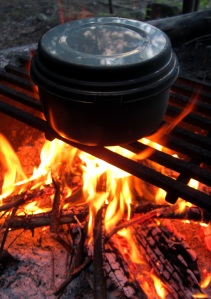 It’s the end of Term 3 for the boys (where did it go I ask you) and the men-children are off on camp.  That’s the trade-off for having three weeks holiday – they go on a five-day school camp at the beginning.   One is off on Cadet Camp at Puckapunyal, and one is off to Glenelg River (Portland) on an Outdoor Ed camp.

One of the men-children has spent the week getting himself organised, looking at his list, organising tent hire, borrowing sleeping bags, packing etc.  We’ve been to the supermarket several times to buy his body weight in food (they have to carry it all themselves but that didn’t stop him loading up on ridiculous non-essential food items) and he’s all organised to head off in the morning.   As my sister said to him, make sure you eat up the heaviest food first – that 20kg pack is going to feel like about 120kg before he knows it.

The other man-child finally packed last night – no worries, it’s all the same stuff from last time – she’ll be right mate.  Yes, you guessed it, our man-child cadet.  The one who froze last time in his hutchie, because he wouldn’t listen to his parents to understand exactly what he was sleeping under (not in)!   He swears he’s got it covered this time – a warmer sleeping bag and a beanie is his version of improved warmth.  No thermals for this tough boy!  As they say, you can’t do it for them, so I guess he’ll learn for himself.  We haven’t seen his list at all, and he doesn’t even know what time he’s due at school in the morning.  Aaaarggh.

The men-children are just getting their last play fight in before five days apart.  They’ll probably miss each other, ironically, and be back at it within hours of returning home.  I’m just getting myself ready for the unnatural peace and quiet that will descend on the house, along with the bursting-with-food-fridge that won’t empty in a nanosecond, and the washing basket that will stay empty for an entire day or two.  Domestic bliss.

Sister of a man-child is probably relishing the thought of no screaming in the house for five days, and the undivided attention of her parents.  Of course we will miss them, by about day four!  I’ll be sure to regale you with any good stories from the camp in a future post.  No doubt they’ll enjoy being boys/men immensely, hopefully without any major incidents or injuries.

Post-Script to The joys (or not) of Parent-Teacher interviews:

As a follow-up to last weeks post, we did actually make enquiries at the school about a spot for one of the men-children in boarding school for a term.  Our reasoning being the study routine might benefit him and help create some good habits ahead of next year.

Sadly I received a call today from the school – they won’t take him.  Not CANT, they WON’T.  That’s right, our man-child’s reputation is so bad they don’t want him in the boarding house.  Something to be proud of – NOT!!